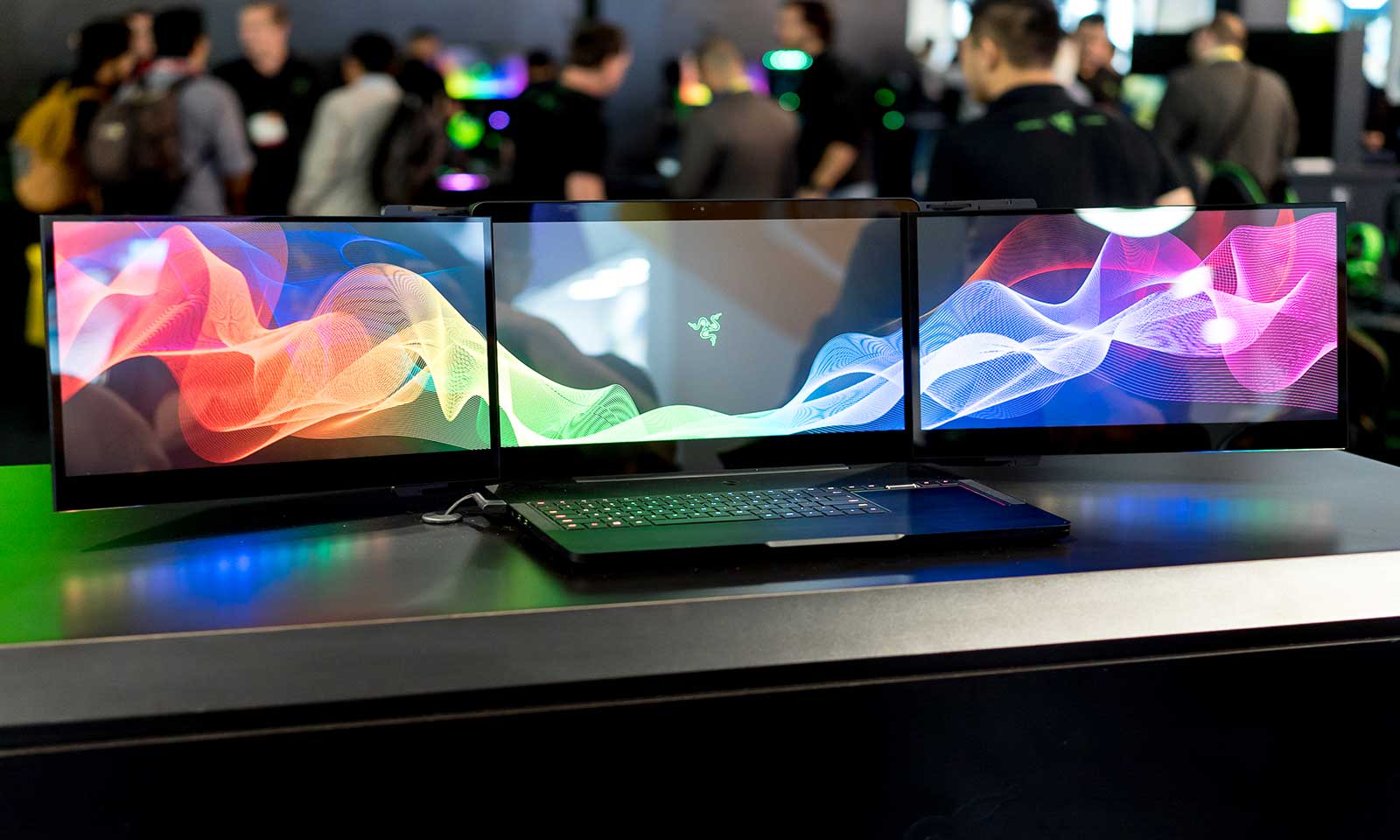 The cream of the crop in terms of revolutionary and innovative new technologies… The international electronics show (CES – Consumer Electronics Show) has once again caused a sensation by presenting even thinner screens, 4k cameras, breathtaking gaming projects and not forgetting artificial intelligence that promises unique experiences. Here are the top 10 top products from this 2017 edition of CES 2017 in Las Vegas!

Razer, the gaming PC and accessories specialist, hit the CES with a high-end laptop concept for gamers. This revolutionary monster has been dubbed “Valerie”, a true beast of power – latest generation Core i7, Nvidia GeForce 1080, etc. – that incorporates not one, but three 4K displays, intended to offer an unparalleled panoramic gaming experience. Adds the ultimate multimedia workspace for graphic designers, video editors, and other creatives. A very successful concept with specifications precise enough to see the device marketed in the near future, and at an exorbitant price, of course.

Still at Razer, the manufacturer is once again devoting itself to the gaming world with Ariana (no doubt a good friend of Valerie’s), a video projector for gaming. Calibrated from the screen on which you are playing, Ariana projects a video image of the out-of-frame elements to push the immersion to the maximum. Borrowed from Microsoft, which introduced it as IllumiRoom in 2013, Ariana’s idea is the heir to Philips’ Ambilight concept. Nevertheless, this time it is adapted to the video game, where it will act as an extension of the projected content. If the project succeeds, your gaming sessions will become a whole new form of immersion!

3. Alexa: the AI of the giant Amazon has made new friends

Although Amazon didn’t have a booth at CES, its Alexa technology was present in quite a few new connected devices. From Lenovo’s connected speaker, to Whirlpool’s washing machines, to Ford’s cars, and more, the retail giant’s connected artificial intelligence has been particularly noticeable. Still making itself scarce in the European market, Alexa has established itself permanently on the American continent with its Echo personal assistant speaker. Depending on the devices on which Alexa is integrated, Amazon’s AI offers various functions – the status of your car, missing products in your fridge, or even answers to your existential questions when connected to the internet. No information has been released about the availability of any Alexa-equipped product in France or Mauritius, but let’s hope it will be soon.

Dell made a big splash at CES with the launch of Canvas, a display inspired by the Microsoft Surface Studio. The latter is an all-in-one touchscreen that tilts like a drawing board, with a programmable physical wheel (Surface Dial). Canvas features a 27-inch touch panel display designed to be simple and tiltable. Equipped with a peripheral connectivity called Totem, the screen can be linked to any computer. The only downside is that the screen does not display 4K. Dell also presented a superb 8K screen, a nice evolution of its XPS 13 ultraportable in a 2-in-1 version, as well as the new XPS 27, an all-in-one with a neat sound system.

5. LG Signature W: a TV thinner than ever

LG has always had the gift of surprising, offering a quality of image staggering thanks to a technology is innovative and powerful. So the Korean brand’s engineers have been hard at work to introduce its new Signature W range for this 2017 edition. The new 4k display is thinner than ever, with a panel that is only 2.57mm thick at the thickest point. Namely that this concept cannot stand without a wall! Indeed, this technological feat needs to be connected to a base containing all the components – signal processing, inputs/outputs as well as power supply, etc.

Sony is making a comeback with a new range of high-end Bravia XBR-A1E TVs, based on OLED panels. In addition to the ultra high definition image quality, which promises to be excellent, Sony has also developed an exclusive sound reproduction technique (Acoustic Surface), which projects sound from the screen itself, as in a cinema, where part of the speakers are located behind the projection screen. So you can have a movie night without leaving your comfort zone.

The HP Envy Curved 34 All-in-one is likely to be a PC that knows how to impress. Tilting vertically by 25°, this desktop PC integrated in the base of a 34-inch screen in 21:9 cinema format is a jewel of technology. HP wanted to hit hard and it is rather successful: the processors are from the latest generation Intel Kaby Lake, the rear connectivity of the foot containing the computer part is more than consistent, the webcam is retractable, and since the screen is large, HP has put the package on the sound. The stand incorporates a B&O audio kit consisting of 2 x 2 speakers backed up by two passive radiators for bass reproduction. A device that is easy to drool over for all geeks.

8. Samsung Chromebook Pro and Plus: finally compatible with Android

The new Samsung Pro and Plus are the first Chromebooks to be natively compatible with Android (so far, only three previously released models had been given an update). Both models have a relatively similar equipment: 4 GB of RAM, 32 GB of storage (expandable with MicroSD) 12-inch Gorilla Glass 3 Quad HD 2400 x 1600 touchscreen with a 3/2 ratio, two USB Type C (but no classic USB!) and a note-taking stylus, delivered in the box. The difference between the two models lies in the technical platform: Intel Core m3 x86 processor for the Chromebook Pro, ARM processor for the Chromebook Plus.

The Asus Zenfone AR is a smartphone with a 5.7-inch Super Amoled QHD display, a 23MP camera powered by a Qualcomm Snapdragon 821 processor backed by 8GB RAM (a first). Nothing very extraordinary at first glance, but this smartphone is the first that will be both Tango and Daydream compatible (augmented reality tools). Complementary technology to virtual reality, augmented reality adds elements to a real image and therefore does not require a helmet to take advantage of it. With Zenfone AR and the Daydream View headset, you’ll be able to explore new worlds with apps like Google Street View and Fantastic Beats, dive into your personal virtual reality movie theater with YouTube, Netflix, Hulu, and HBO, and play Gunjack 2, Lego BrickHeadz, Need for Speed and dozens of other titles.

This year, it’s Panasonic that makes official the Lumix GH5, the successor of the current video champion, the GH4. As for the GH5, it takes the “SLR” format of its precursor, but pushes all the limits: double memory card reader, reinforced tropicalization, sensor 25% richer in pixels (20 Mpix against 16 Mpix in the past), better burst, better viewfinder, etc. In addition, there are even more professional video modes such as 4K UHD video. In addition to the new 60 fps mode, you’ll also get a 30 fps mode with a very high data rate: 400 mbits in 4:2:2 in 10 bit All-I (all images are fully encoded). It’s a great way to edit at a level of quality never before achieved for a “simple” camera, and it’s probably not going to cost cheap.